BANGKOK/YANGON/NAYPYITAW -- Myanmar's bloodless coup began with surgical precision in the pre-dawn hours of Monday as teams of soldiers detained the country's de facto leader, Aung San Suu Kyi. At the same time, the military was taking into temporary custody top officials of her National League for Democracy and about 400 lawmakers staying in the capital, Naypyitaw, for the first sitting of parliament since the Nov. 8 general election.

Internet and mobile phone communications were disrupted, and a statement read out on military television announced that the commander in chief Senior Gen. Min Aung Hlaing was now in charge. He declared a one-year state of emergency.

The move, according to the statement, was in response to fraud during last year's election. With this, the government of Myanmar silently and seamlessly changed hands, without a shot. But the turmoil is just beginning.

The coup followed days of stop-start threats by military commanders to "take action" over their allegations of electoral fraud. The previous day, an unexpected assurance by Min Aung Hlaing that the military would "abide by the constitution" eased tensions that had been wracking the country since the election. Ironically, in taking power the military cited Section 417 of the constitution, which under some interpretations enables a military takeover under a "state of emergency." 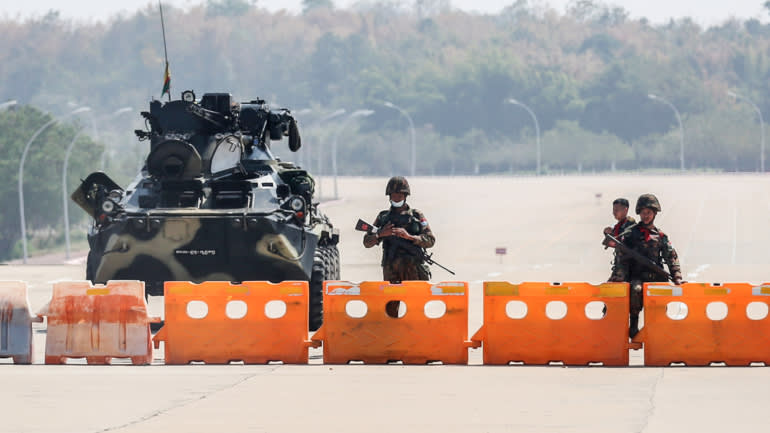 A military checkpoint in Naypyitaw, Myanmar's capital, on Feb. 1.   © Reuters

On Tuesday, a stunned but jaded country digested the reality. Suu Kyi had been under house arrest for 15 years over two decades to 2010, and now she was once again. Bizarrely, even as political leaders and activists remained in detention, calm prevailed in Naypyitaw and commercial hub Yangon. The internet and mobile communications were back up, banks were operating, and supermarkets and other businesses were open. Most people were socially distancing as the country continued to fight COVID-19, which has so far killed more than 3,100 and infected more than 140,000.

While armored vehicles could be seen around the capital at key government buildings such as the parliament compound and the presidential palace, there was no extra security at key ministries.

In Yangon, the initial mood of fear and shock steadily shifted to frustration and anger. "People still have the courage to get onto the streets. But I think they are still waiting for the NLD and pro-democracy forces for instructions. They don't want to be accused of being a source of violence, if there's any," said a young resident of central Yangon who gave his name as Anthony.

Hours after the coup, Suu Kyi had issued a general call via Facebook -- evidently prepared in anticipation of her arrest -- for people to "protest" the takeover. By Tuesday, activists had taken matters into their own hands, most visibly on social media, where posts under the hashtag #CivilDisobedienceMovement called for a general strike and urged people to bang on metal pots and buckets.

The Ministry of Information warned against posting material that would "promote instability." But at 8 p.m. Yangon roared with the din of clanging metal and loud shouts of protest. Highlighting popular opposition to the new junta, doctors and others at more than 40 government hospitals announced that they would stop working as "civil servants for a military junta" and try to help elsewhere to fight the pandemic. Demonstrators hold up portraits of Aung San Suu Kyi and her late father, Maj. Gen. Aung San, during a protest at the Myanmar Embassy in Bangkok on Feb 1.   © Getty Images

A Yangon-based Asian investor was scathing about the coup and its leaders, echoing the sentiment of many foreign corporate executives in the country.

"Those who have put their money and faith in the Myanmar market are in for a shock. A key reason Myanmar is among the least developed in Southeast Asia is because of the 'bonkers' at the top," he said, referring to the military leaders.

"The coup has blown the country's trajectory entirely off course," the investor said.

The more optimistic view suggests that some appointments to the new cabinet have been better than feared. In the first two days, the junta announced 19 cabinet posts and other key appointments via its military-run TV network, purging 24 of Suu Kyi's ministers and deputies. Among the new appointees, many are from the administration of President Thein Sein (2011-16) and include a few respected technocrats.

But the overall mood is gloomy. Author and historian Thant Myint U, grandson of former United Nations Secretary-General U Thant, tweeted in response to the coup announcement: "The doors just opened to a very different future. I have a sinking feeling that no one will really be able to control what comes next. And remember Myanmar's a country awash in weapons, with deep divisions across ethnic & religious lines, where millions can barely feed themselves."

Even in the last five years under Suu Kyi's NLD government, the military, or Tatmadaw as it is known, made little pretense of respecting civilian rule. The stiletto coup mechanism was sitting inside the 2008 constitution -- a military-drafted document that set the stage for a discreetly planned transition to quasi-civilian rule.

Under a suite of constitutional provisions beginning with Section 417, Min Aung Hlaing was able to declare a state of emergency and take over legislative, judicial and executive powers indefinitely, although the coup announcement pledged elections after one year of emergency rule.

With its deviously worded sections that check and countercheck civilian institutions and power structures, the document enshrined the military's hold by assigning it 25% of all seats in state and national parliaments and three key cabinet positions in defense and security. A 75% vote is required to change the constitution, effectively giving the military veto power. A provision that bars any Myanmar citizen with a foreign spouse or child has also kept Suu Kyi, whose children and late husband were British, from attaining the presidency -- despite her broad recognition as the country's de facto leader. Aung San Suu Kyi walks to take the oath at the lower house in Naypyitaw, Myanmar's capital, in May 2012.   © Reuters

The military had many reasons to want a civilian figurehead while it held the reins of power. By 2010, after nearly five decades of military misrule and sanctions imposed by the European Union and the U.S., even the generals had recognized that the country was on the brink of collapse. Myanmar was an isolated pariah state, closed to most visitors, with a broken economy, almost no internet and harsh media censorship under a succession of repressive military governments -- punctuated by two bloody military takeovers in 1962 and 1988.

Nearly half the population lived far below the poverty line. The kyat currency traded at more than 200 times the official rate on the thriving black market. And inflation in some years exceeded 30%, peaking at 57% in 2002. A SIM card even in 2011 cost upwards of $2,000, and cars were priced beyond the reach of most.

In 2010, junta chief Than Shwe abruptly announced his departure and elections and anointed a mild-mannered general, Thein Sein, as the candidate for the ruling Union Solidarity and Development Party. Thein Sein's predictable victory was greeted with cynicism by the West.

But following the release of Suu Kyi in 2010 and sweeping liberalization measures, he set the seal on a new reformist era. Myanmar's pivotal moment in the last decade was the visit of Barack Obama in 2012 as the first sitting U.S. president to come to the country.