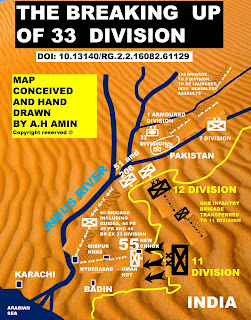 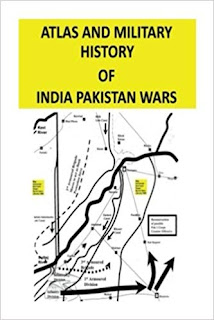 18 Division plan to capture Longanewala was brilliant in conception. It failed because of poor logistic planning and lack of air cover. There was hardly anything in front of the 18 Division attacking force heading for Longanewala and Jaisalmer, however, since there was no air support just two Indian Hunters neutralised Pakistani armour! This attack has been much criticised by arm chair strategists in Pakistan. However, the situation was saved by the fact that Indians opposing 18 Division were equally incompetent and hesitated from attacking the withdrawing Pakistani troops from Longanewala. One positive aspect of the whole affair despite all Pakistani imperial blunders was the fact that the attack even in its failure caused such mental discomfort to Indian Higher commanders that the Indian plans to attack Rahimyar Khan were dropped.27 Thus Indian Southern Command Army Commander Lieutenant General Bewoor  requested Manekshaw for a change in task with the plea that resources placed at his disposal were insufficient for capture of Rahimyarkhan.28 The Indians decided to call off all offensive operations of 12 Division against Rahimyar Khan and transferred one of the three brigades of 12 Division to Kutch Sector on the 12th December for the planned attack on New Chhor.29  This reinforcement was a sugar coated bullet for 11 Indian Division since it only further compounded the logistic nightmare of 11 Indian Division.30   Indian Armoured Corps historian was intellectually honest enough to admit that “main toll was taken by the terrain,the IAF destroyed a sizeable number of tanks and vehicles” while the 12 Division itself did little.31

Indian 11 Division was assigned the task of capturing  New Chhor held by a Pakistani brigade supported by a tank squadron. A force comprising 85 Infantry Brigade and an independent tank squadron

(T-55) was earmarked. This force contaced the outer defences of  New Chhor at Parbat Ali on 8th December. The Indians wanted to mount a divisional attack on New Chhor but were delayed due to administrative reasons. By 11th December the second Indian brigade also reached the area. On 13th December the Indians launched a brigade plus attack capturing Parbat Ali. However, their time and space was by now totally off balance. The area had been reinforced by another brigade of 33 Division and on 15th December as per their own admission a probing force of the Indians opposite New Chhor was severely mauled.33 This was done by 60 Brigade consisting of three fine infantry units i.e 44 Punjab, 45 Punjab and 46 Baluch. 44 Punjab in particular distinguished itself at 199 and 200 r! The Brigade in actual fact was commanded in the field by Lt Col (later Brig) Muhammad Taj SJ & Bar, who was CO 44 Punjab (now 4 Sindh). 44 Punjab was the hub for the defence of Naya Chhor, the Indians actually withdrew in the face of aggressive patrolling. This fact was acknowledged by Indian GOC 11 Division in his flag meeting with Major General Iqbal (later CJCSC) after the war.34 There is a Nicholson Memorial at Taxila but no memorial in Chhor for Pakistan Army soldiers who saved Sindh in 1971! It is an irony of Pakistani military history that Major General Shaukat Riza has not mentioned this incident at all while it was Major K.C Praval an Indian military historian who acknowledged this fact. On the other hand Fazal Muqeem criticises the decision of sending 60 Brigade to Sindh. Had 60 Brigade not come to New Chhor the Indians may not have stopped before reaching Mirpur Khas! Fazal Muqeem thus did not mention 60 Brigade at all in his book. Perhaps doing so would have contradicted his brilliant criticism of dividing 33 Division! The Indian brigade operating in Umerkot-Nagarparkar area captured many thousand square miles but all these consisted of empty desert. Another aspect of military history writing in Pakistan is regimental bias and personal likes and dislikes. It is significant that all the three units of 60 Brigade were new units and thus not worthy of being mentioned by stalwarts from old units. The same was the case with Bara Pind where 31 Cavalry and 27 Cavalry were praised by Indians for better planning and good battle procedures but were not praised by any Pakistani military historian!

At one stage during the war the Indian GHQ wanted Southern Command to capture Badin with a brigade group from Kutch side but this idea was dropped because of administrative/logistic problems.35