Japan to join India and Australia

Quad drills: Australia to join India, US and Japan at Malabar U.S. and Japanese sailors conduct a board, search and seizure exercise on the guided-missile destroyer USS John S. McCain in the East China Sea in a past Malabar drill. (Photo courtesy of the U.S. Navy)
KIRAN SHARMA and WAJAHAT KHAN, Nikkei staff writersOctober 20, 2020 01:50 JST

NEW DELHI/NEW YORK -- India on Monday said Australia will participate in its annual naval exercise with the U.S. and Japan next month, a move expected to give a boost to defense cooperation among the four members of the Quadrilateral Security Dialogue, or "Quad," while raising eyebrows in China.

"As India seeks to increase cooperation with other countries in the maritime security domain and in the light of increased defense cooperation with Australia, Malabar 2020 will see the participation of the Australian Navy," the Indian defense ministry said in a statement.

The announcement comes at a time when India and China are engaged in a tense standoff in eastern Ladakh along their disputed Himalayan border. New Delhi is to organize the Malabar exercise in the Bay of Bengal and the Arabian Sea this November.

Malabar began in 1992 as a bilateral India-U.S. drill, with Japan joining on a permanent basis in 2015. It was conducted off the coast of Guam in the Philippine Sea in 2018 and off the coast of Japan in 2019. Australia last participated in 2007.

"This year, the exercise has been planned on a 'non-contact-at-sea' format" and "will strengthen the coordination between the navies of the participating countries," Indian defense ministry said, adding the participants are "engaging to enhance safety and security in the maritime domain." 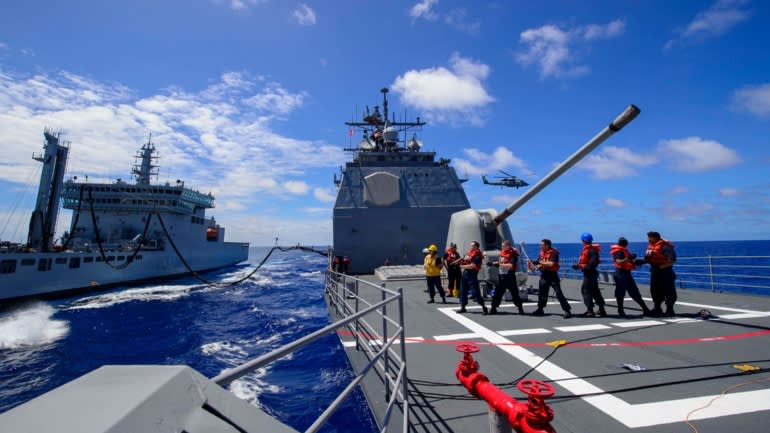 Sailors assigned to the guided-missile cruiser USS Antietam conduct an underway replenishment training exercise with the Indian navy oiler INS Shakti in a past Malabar exercise. (Photo courtesy of the U.S. Navy)

They collectively support a "free, open and inclusive Indo-Pacific and remain committed to a rules-based international order," it said.

Australian Foreign Minister Marise Payne hailed the announcement as "another important step" in Canberra's deepening relationship with New Delhi. "It will bolster the ability of India, Australia, Japan and the United States to work together to uphold peace and stability across our region," she said in a statement.

Australian Defense Minister Linda Reynolds said in the same statement that "high-end military exercises like Malabar are key to enhancing Australia's maritime capabilities, building interoperability with our close partners, and demonstrating our collective resolve to support an open and prosperous Indo-Pacific."

The naval drill also showcases the "deep trust between four major Indo-Pacific democracies and their shared will to work together on common security interests," she added.

"These are not simple exercises" he told Nikkei Asia. "In the past editions, we have seen sophisticated anti-submarine warfare, surveillance aircraft and reconnaissance aircraft all being deployed. Now, when Australia also comes in, and there are logistics support agreements [among the four countries], it technically means the expanse of the Quad is now superimposed on two regions: the Indian Ocean and Pacific Ocean."

In September, India and Japan signed a pact for the reciprocal provision of supplies and services between their armed forces, months after New Delhi signed a similar deal with Australia in June. India already has such an agreement with the U.S. 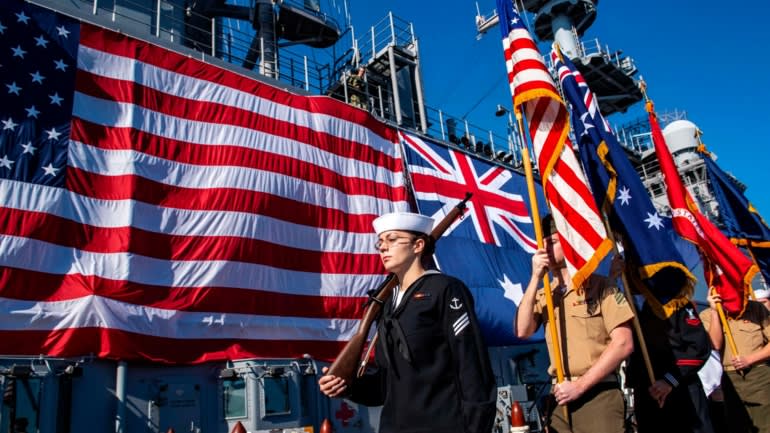 The U.S. and Australian colors are displayed during the closing ceremony of exercise Talisman Sabre 2019 aboard the amphibious assault ship USS Wasp in Brisbane, Australia. (Photo courtesy of the U.S. Navy)

Sameer Lalwani, a senior fellow and South Asia director for the Washington-based Stimson Center think tank, told Nikkei Asia that Canberra's inclusion in Malabar "is a much-awaited and positive sign that the Quad will start operating together rather than just meeting."

"It's also a strong signal the U.S. defense establishment continues to make advances in its Indo-Pacific multilateral efforts despite a contentious election and potential transition period," he said. "Malabar's effects on security and deterrence in the Indo-Pacific, however, will depend on growing frequency, consistency and complexity of these exercises and other Quad activities."

"China can't be happy about the announcement but most likely they will only be stirred, not shaken," Lalwani said. "Chinese strategists seem to be betting there is an upper limit to this quadrilateral partnership and may only really start to worry when the scope narrows and commitments deepen."

China once called the Quad nothing but sea foam that will dissipate, but now there are reasons for it to be concerned, as there are "basically four anchorages to the initiative," as Jha put it. "Quad now has a wider strategic expanse which is likely to solidify more strongly, given the conditions that China is seen in the current context," he said.

Earlier this month, foreign ministers of the four countries met in Tokyo and highlighted their readiness to work toward realizing a common vision for the Indo-Pacific.

"The fact that we are meeting here today, in person, despite the global pandemic, is a testimony to the importance that these consultations have gained, particularly in recent times," Indian External Affairs Minister Subrahmanyam Jaishankar said in opening remarks.

"As vibrant and pluralistic democracies with shared values, our nations have affirmed collectively the importance of maintaining a free, open and inclusive Indo-Pacific," Jaishankar said. "We remain committed to upholding the rules-based international order, underpinned by the rule of law, transparency, freedom of navigation in international seas, and respect for territorial integrity and sovereignty, and peaceful resolution of disputes."