Christine cites sources who were in their nappies when Pakistans disputes with India started but forgets direct participants like Lieutenant Sir James Wilson,KBE,MC who in an article published Army Quarterly and Defence Journal,Volume 121,No 3,July 1991, noted on page-304 that :--
“Many influential Indians,most importantly the key minister for the interior ,Sardar Patel never accepted the reality of Pakistan”.They felt it was a ramshackle creation which would collapse sooner rather than later,and resolved to give the new state neither help nor credibility”.
But Ms Christine is infected with preconceived germs of hostility and constantly cites rabidly hostile sources like Haqqani,Arif Jamal,Ganguly etc.
Her assertion on page 4 that Pakistan was repeatedly defeated by India also proves her total ignorance of basic facts of Indo Pak military history which this scribe will re-state for the benefit of the layman reader:--
1- Kashmir War-1947-48- DRAW
2- 1965 Indo pak War- INCONCLUSIVE
3- 1971 Indo Pak War- Pakistan lost its Eastern wing but India failed to destroy Pakistans strategic centre of gravity in West Pakistan and Indias greatest Strategic thinker Ravi Rikhye describes 1971 War as a strategic failure.Even Indias Chief of Staff of Eastern Command General Jacob in his book “Surrender at Dacca” stated that all that India gained in the war was lost at the negotiating table at Simla.
4- Siachen -1984- Ongoing –INCONCLUSIVE
5- Kargil – Pakistani failure but brought no strategic change in Kashmir.
6- Afghanistan proxy war of Pakistan and India . Pakistani proxies called Taliban dominate some 55 % of the country despite US/NATO presence.
How this so called educated lady terms it as repeated defeat for Pakistan is hard to understand.
Her claim on page-4 that Pakistans concerns towards India are ideological rather than security driven is also questionable and debatable.
#pakistan #pakistanarmy #christinecfair #nuclearweapons #nukes #military #books #bookreview #journalofbookreview 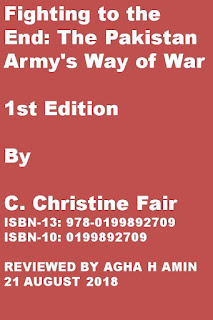